Version 4.7 of Folder Marker is ready for your download! Check the ability to customize the folder tag names, faster icon search with color filters, adjustable view size of the icons, the increasing number of supported image formats, much easier work with the command line, and much more.

Plus, a special offer at the end of the article…

This update is free for those who bought Folder Marker on October 12th, 2021 or later. Please click Help->About in your Folder Marker to check if you can update for free to the latest version or if you need to pay an update fee.

Along with the icon, the Folder Marker also changes the text tag of the folder. This not only allows you to quickly identify folders visually by icon or color but also allows you to sort and filter them. Read more here. In version 4.7, we added the ability to change these tags.

For example, imagine you mark your work folders with blue, family-related documents with violet, and photos with gray. Instead of “Blue”, “Violet”, and “Gray” tags, you can arrange “Work”, “Family”, and “Photos” tags instead. So, through time, you don’t need to remember the meaning of each color and can intuitively filter/sort folders by tag names.

In a Pro version, you will have a built-in Color filter in the Letters&Numbers icons (ABC Tab). Also, such function is in Badges, Two-color, Numbered folder icon sets that you can purchase here.

Big icons in the main window

The icons’ size in the Folder Marker’s main window becomes adjustable. Choose from 16×16 to 256×256. This makes working with Folder Marker on the big hi-res screens much more convenient. You requested this feature. We did it.

Plus, you can press the Ctrl and move the mouse wheel to reduce or increase the size of the icons in the Main window.

Now in the Pro version, you can use 90 popular image formats to customize your folder icons. Not only ICO, ICL, or JPG&PNG, but also camera RAW files, iPhone HEIC files, and many more. You can check the list of all supported image formats here: What image formats does Folder Marker 4.7 allow to use as folder icons? Full list.

For example, you backup your Work folder with all subfolders to move it to another device. With the updated Backup-Restore function in Folder Marker, you can also move all your colorization, even if the Work folder on a new device is stored in a different path. Use the new “Apply replace rule” feature and replace the path from the previous device to a new one.

Now in the Pro version, the Letters&Numbers icon set (ABC tab) has multiple color choices on Windows 10 and 11. We have added: red, orange, brown, yellow, lime, azure, blue, pink, violet, white, gray, and black letters and numbers. Plus 432 icon choices at all.

All these changes make a Drag-n-drop-way of working with Folder Marker really convenient.

You can see the initial folder icon in the Folder field. This gives a better understanding of what you will customize and when the customization process is finished. A simple touch, but it makes work with folders comfortable to track.

Get help on Folder Marker’s commands in the Command Line

Did you know you can colorize your folders using Folder Marker and the command line? This allows you to program your own script or BAT file with colorization. And now, writing such a script is much easier cause you can get help on how to work with Folder Marker by command line right in… command line :). Just type

command, and you will see all the commands you can use to manage the Folder Marker. This update is for you if you use a command line while working with a computer.

Now Folder Marker Pro understands relative paths when writing a command line script. So you can write like “..\..\CustIcon.ico” or “.\CustIcon.ico” instead of the full path to the icon.

Why is it worth updating?

During the download of the new version of the program you can see a blue Windows SmartScreen like this:

This is the expected behavior of Windows. It indicates the file was not downloaded by many people (that is logical, cause this is a new version we just released). After we collect a couple of thousands of downloads, this window disappears.
Click More Info, then you will see the Run anyway button. Click Run anyway to start the installation of the Folder Marker. 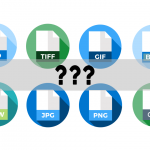 What image formats does Folder Marker 4.7 allow to use as folder icons? Full list.

How to color-code zipped files?