Version 4.7 of Folder Marker Pro has been released, and it supports 90 image formats. You can use not only JPG/PNG images but almost all popular image formats to customize your folder icons.

So, if you have a question: does it support *.dicom or *.nef? We have an answer for you – a complete list of image formats compatible with the update. Check it below!

It is a standard accepted format for the medical community: to view, store, retrieve and share medical images.

Gif is a popular web format that often is animated. Each file can contain 256 indexed colors and support up to 8 bits per pixel.

WIC Formats (if you have Extensions installed)

WIC provides access to fast Windows methods for saving images. Also, to support some WIC formats (such as HEIF, AVIF, and WebP), you will need to install a codec from the Microsoft Store.

HEIC is the file format name Apple has chosen for the iPhone Standard. These are photos you take on the iOS camera on your smartphone.

To have the ability to use HEIC/HEIF files as folder icons in Folder Marker on Windows 10 and 11, you need to:

1. Get the HEIF “Image Extensions” in Microsoft Store (Free)

2. Get the “HEVC Video Extensions” from “Device Manufacturer”  in Microsoft Store (Free)

Please note that there are 2 versions of “HEVC Video Extensions”. One is free, another you have to pay – $1. Get the free one from here.

Folder Marker supports one of the most widely used image formats – JPEG. It is used by digital cameras and other photographic image capture devices.

JPEG 2000 was created as a modern replacement for the JPEG format. It supports many compression types and color formats.

PCX uses color pixels to display images. When DCX is a multi-page variant of PCX.

Folder Marker is compatible with PNG format, one of the best formats to use when saving images for editing. Plus, there are a lot of free pictures on the Internet in png format.

One of the favorite formats among photographers, TIFF stores high-quality images and has many sub-formats. It can be used with monochrome documents, such as Fax images.

BMP is a native Windows image format, so Folder Marker supports it too. It is used to store images on Microsoft Windows and OS/2 operating systems.

Format to store mouse pointers of different sizes and resolutions.

A metafile is a file that contains specifications for another file. Commonly associated with digital graphics, particularly vector images. Often used for clip art.

Native format is defined by the application that created that electronic document. For example, Folder Marker can deal with Targa (*.tga), Wireless BMP (*.wbmp), and Virtual Studio Technology (*.vst).

As you can see, you can now use almost all well-known graphical file types as folder icons. 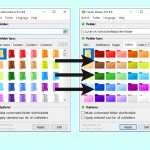 How to make Windows 10 folders landscape-oriented