This is a minor update of Folder Marker that we recommend to install to everyone, who bought version 4.4.

What’s new in this version

BTW, If you didn’t see a 4.4 update, please go here. We have a lot of new features there.

Q: I didn’t see the “List index out of bounds (0)” error. Do I still need to update?
This update is not a must, but we recommend to update anyway.

Q: I use an old version of Folder Marker. Can I just test the new version before deciding to buy the upgrade?
A: Yes. Installing version 4.4.1 will grant you 30 days trial, even if your trial period has ended for previous versions of Folder Marker. So you can freely test all the new functions.

But please note, if you decide to downgrade from v 4.4.1 back to 4.3 or lower, you will see “List index out of bounds (-1)” error. It appears cause we have changed the coding of the files we store data. We have the fix for this, which is really easy-to-use. You will need to run it once after the downgrade. Here are detailed instructions.

Q: I’ve downloaded the latest update, but I see your file might put my PC at risk.
Windows 10 has a security feature called “The SmartScreen” that prevents you from running unsigned apps, and ensures end users don’t run malicious apps and end up infecting their systems. Each time you run EXE file, downloaded from the internet, SmartScreen checks the information about this file on Microsoft servers.

When we release a new version of our software, we upload a new EXE file to the Internet. Microsoft doesn’t have statistics about it yet and doesn’t know is it safe or not. This is why SmartScreen informs you the file is potentially unsafe.

So, “unrecognized app … might put your PC at risk” means “we don’t know this file”, this is normal behavior for the newly-released software. All the first users will see this message until the file will be downloaded several thousands of times, and we, developers, have no ability to influence on this :(.

Before releasing the new version, we check our EXE files by antivirus software to be sure it is safe for our users. But if you wish to re-check your download, we recommend uploading the suspicious file to VirusTotal. VirusTotal checks the uploaded file by 60+ antivirus/anti-malware engines, so you can see what the majority of the antiviruses think about your file. If you see there 0 detections or 1-2 detections from rarely known engines, most of all this is false-positive detection, and you are safe to run this file. 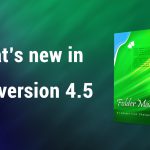